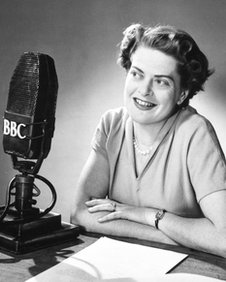 If you know the correct response to that question, then you are very old. And do you know the setting for the answer?

You have to be four or five years old. And you must be sitting on the sofa, next to your mother. It would be 1:45pm. Your mother has just turned on the wireless; my mother would always have called it a wireless and never a radio. It was time for a national institution that occurred every weekday in Britain at this time. It was an iconic 15-minute radio program called Listen With Mother.

The question was posed by the program’s presenter, Daphne Oxenford, who died yesterday at the age of 93. She paused after her question for about two seconds, during which she could be sure that the well-behaved children of the 50s and early 60s would be saying “Yes, Miss”, so politely, that she could then confidently reply “Then we’ll begin!”

Today’s pre-schoolers would not have sufficient attention span for what followed. Ms. Oxenford followed this question by reading – yes, just reading – a story. There were no animations or illustrations; this was radio (sorry, wireless). We just sat and listened. I used to close my eyes, because the images were in my head. It was the legendary broadcaster Sir Terry Wogan who used to say “I prefer radio to television, because the pictures are better”.

My love for the show was so great that I would apparently reproduce the stories myself on car journeys, asking Daphne’s iconic question to my family, and pausing for their reply, even though my naughty big sister would usually reply “No, I’m not sitting comfortably!”

Some childhood memories will never return. I could not imagine my own children, who reached 4-5 years old in the 1990s, sitting comfortably to listen to a disembodied radio presenter telling a story for 15 minutes. Today’s 5-year olds would not even want the gentle style of story. Society has certainly changed. How much have we lost?

Are you sitting comfortably?

I have an old-fashioned wireless, set like the one pictured, in my shed. It was broken beyond repair when I bought it. I wanted a broken one. I did not want one that worked. I did not want to turn it on, tune it in, and listen to 21st Century rap music emerge from the beautiful Bakelite. So, ironically, I have used newer technology. I have removed its guts, and installed a tiny, hidden MP3 player, filled with music and audio clips that sound right emerging from its speaker. I just wish I had a whole episode of Daphne’s rich BBC voice, asking after my state of comfort, and assuring me that we could all now begin.